Double Orbit invites us into a compact world of ambiguous signs, secret passages and seemingly haunted premises. Exploring the peripheries of large western metropolises, Grégoire Pujade-Lauraine's photographs study the built environments that harbour and shape human life, revealing the cryptic symbols etched across their surfaces and embedded in their shadows. The looming forms defy easy categorisation and disconcerting cyphers periodically emerge from a lingering dusk; an oversized key, a black concrete moon, or the illusion of a limitless temple.

Pujade-Lauraine’s photographs depict the mundane details of the urban environment, yet when brought together read like a set of tarot cards – becoming open-ended allegories, their meaning awakened solely in combination. Double Orbit presents an elusive world, whose enigmas seem to emerge independently of the deliberate hands that built it, and which alludes to the oblique mysteries held on the surface of familiar surroundings. 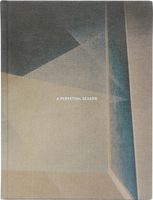