The main idea behind STEIDL–WERK N°23 was to create a paper object never seen before. A joint project, it stems from the exclusive collaboration between Theseus Chan’s WERK Magazine and Steidl Publishers for this particular issue of WERK. Chan’s and Steidl’s common interest in the analogue, in art and books, and their addictive fascination with the smell of inks and the texture of paper combines in their shared philosophy of subverting technology by creating work that has a strong human imprint. Accordingly, this magazine issue features a young Japanese artist, Masaho Anotani, whose complex collage-like drawings and sometimes surreal, sometimes disturbing compositions are made almost entirely by hand.

The design was inspired by a tightly taped, neatly formed package sent to the magazine by Anotani containing his printouts—an idea that found its way into the book itself which comes as an entirely sealed entity. The title “DEFORMED” is part of the idea to create a misshapen book that evolves along the process of coming into existence. Building on the concept of clashing, of creating and destructing the final product, something new—a chaotic bricolage of “printed junk”—is born. 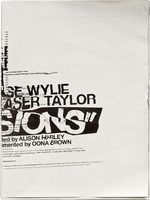