The Spaniard Hugo Alcol spent much of his time cruising through the music scene before he was commissioned to photograph people at top-class events. His job was to record party scenes, allowing the hosts to present themselves and their social environment in a glamorous fashion. But in doing so, Alcol developed his own, unique way of capturing the extravagance of his clients in images. He requires neither cunning tricks nor dramatic distortion of motifs: It is quite enough to slightly shift what is considered commonplace in this society and what is perceived as a reality. After all, an archipelago also has the possibility to claim sovereignty for itself.

“This enigmatic book is both a puzzle and a delight at the same time. As the photos show anything from a Spanish social event, to a weird woman with a rabbit and a dead rat floating upside down in a green pool. Although difficult to quite see what is going on, we are constantly drawn back in to try and understand the narrative and we are wanting to come back for another view. It gets under our skin, and that is a rare attribute.” Martin Parr 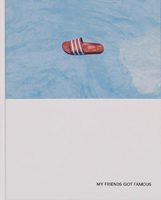 My Friends Got Famous