The photographer known by her artist's name Sarah Moon (b. 1941) grew up in England and France. Having worked as a model in Paris for some years, she began taking photographs in 1968. Her first campaign shots for Cacharel were followed by countless commercial works for Dior, Chanel, Comme des Garcons, and Christian Lacroix. Additionally, Moon photographed fashion editorials for magazines, and shot short movies and documentaries as well as the feature film Mississippi One. She was the first woman to ever shoot for the renowned Pirelli calendar. Recent works include photographs and a short film for Dior homme.

Looking at Moon's frequently blurred black-and-whites or her pale color photographs--often taken on Polaroid film--one is beckoned into a realm of dreams, myths, and fears. Simultaneously, her works allude to heavenly ideals, unknown landscapes, and enchanted cities. Her portraits of girls and women, especially in her fashion images, appear to grant a glimpse into timelessness.

Sarah Moon's works have been exhibited in museums and galleries around the globe, including at the Center of Photography, New York, the Maison Europeene de la Photographie, Paris, the Kyoto Museum of Contemporary Art, and the Royal College of Art, London. The book was published on the occasion of the most comprehensive retrospective exhibition in the House of Photography of the Deichtorhallen Hamburg, Germany. It has an embossed cardboard cover with linen spine, a separate image leaf is shrinkwrapped onto the cover. 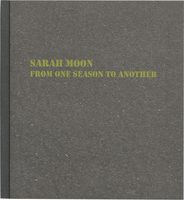 From One Season To Another